‘We are edging ever closer’: World could temporarily hit 1.5C warming within five years, WMO warns 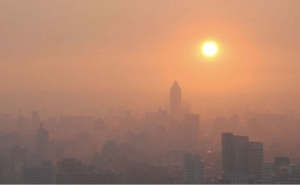 The world could reach 1.5C of global warming within the next five years, at least temporarily

Risk of reaching the totemic climate threshold set out in the Paris Agreement in at least one of the next five years now at 50 percent, research shows

There is now a 50 percent chance of average global warming temporarily reaching the critical 1.5C mark within the next five years, underscoring the scale of the climate crisis facing the planet and the rapid emissions cuts needed within the current decade to keep alive any hope of meeting the goals contained in the Paris Agreement.

That is the latest sobering assessment of the World Meteorological Organisation (WMO), which yesterday warned global average temperatures are likely to hit 1.5C above pre-industrial levels for at least one of the next five years, with the likelihood of the milestone being reached only set to increase with time.

Hitting or exceeding 1.5C during a single year would not necessarily mean the world has breached the temperature threshold set by the Paris Agreement, as temperatures could well decline below that level in the following year, but it does underscore how close the planet is to potentially exceed the mark for an extended period, the WMO warned.

The UN-affiliated body also said there was 93 percent chance of at least one year between 2022 and 2026 becoming the warmest on record, and of global average temperatures over the next five years is higher than the previous five years period from 2017 to 2021.

The chance of exceeding in the near term the totemic 1.5C threshold – which marks the lower temperature goal set out in the Paris Agreement, alongside a commitment to keep temperature increases ‘well below 2C’ – has steadily risen since 2015, when it was close to zero, according to the WMO. But that probability reached 10 percent between 2017 and 2021 and has now increased to almost 50 percent for the next five years in its latest assessment published yesterday.

The findings form part of the WMO’s annual update on the state of the planet’s climate and the potential for warming ahead, which it said harnesses the expertise of internationally acclaimed climate scientists and the latest prediction systems from climate centers around the world.

WMO Secretary-General, professor Petteri Taalas stressed that 1.5C figure was not just “some random statistic” but rather “an indicator of the point at which climate impacts will become increasingly harmful for people and indeed the entire planet”.

“This study shows – with a high level of scientific skill – that we are getting measurably closer to temporarily reaching the lower target of the Paris Agreement on climate change,” he said. “For as long as we continue to emit greenhouse gases, temperatures will continue to rise. And alongside that, our oceans will continue to become warmer and more acidic, sea ice and glaciers will continue to melt, sea level will continue to rise and our weather will become more extreme. Arctic warming is disproportionately high and what happens in the Arctic affects all of us.”

Almost 200 countries worldwide have signed up to the Paris Agreement since it was first brokered in 2015, committing signatories to collectively ensuring global average temperatures are limited to well below 2C by the end of the century while pursuing efforts to limit the rise even further to 1.5C.

However, research has highlighted that the climate risks to human society and life on the planet are far higher in a 2C world compared to a 1.5C world, with higher levels of warming leading to an increased risk of catastrophic impacts and tipping points that could result in the destruction of natural carbon sinks.

In order to stand even a 50 percent chance of limiting global average temperature rise to 1.5C by 2100, scientists have stressed that global greenhouse gas emissions must fall by 45 percent by 2030.

However, emissions remain on an upward trajectory, and the world’s collective commitment to delivering on the goals of the Paris Agreement has been severely tested by myriad crises since nations signed the Glasgow Climate Pact at COP26 less than six months ago.

Surging fossil fuel prices spurred by the economic recovery from the Covid-19 pandemic have been further exacerbated by the invasion of Ukraine by Russia, which is one of the world’s largest fossil gas producers and a major energy supplier for Europe. As a result, many nations – particularly in Europe – have been scrambling to secure alternative supplies of oil and gas to bolster their energy security, while wider economic headwinds also risk dampening much-needed investment in the net-zero transition.

In the UK, the government is reportedly considering granting fresh licenses to drill for oil and gas in the North Sea, as well as considering approving plans for a new coking coal mine in Cumbria, despite warnings that these projects will likely have no impact on energy security or costs in the short term.

However, in an interview with the BBC yesterday, US climate envoy John Kerry argued that while the war in Ukraine “presented a challenge” in the battle against climate change, the Kremlin had not “wrecked” the renewed commitments nations made through the Glasgow Climate Pact last year.

“What Vladimir Putin has done by using gas energy as a weapon, is to convince Europe that it has to move faster,” he said. “So, in fact, Europe is going to try to move to deploy renewable energy, wind, solar, etc, much faster than they originally had planned. The key will be finding greater levels of finance on an international basis to accelerate the transition to those renewables so that investment begins to move there faster.”

Kerry argued the UN Climate Summit in Glasgow had been “enormously successful in raising ambition”, as he called on governments and businesses around the world to continue raising their game this year ahead of COP27 in Egypt in November.

“The bottom line is we’re in trouble right now unless we can turn things around faster over the next eight years,” he told the BBC. “We have to still fight for the 1.5, as hard as it may be. But I remain an optimist because I think that if we do what we’ve promised to do, we can have a 45 percent global cut globally between now and 2030.”

His comments came as Christian, Muslim, and Jewish leaders joined the UN Secretary-General Antonio Guterres is calling on financial institutions to end all new investment in new fossil fuel projects.

A statement released yesterday that has been signed by the Leaders of the World Council of Churches, Muslim Council of Elders and New York Board of Rabbis, states that banks, pension funds and insurance firms have a “moral imperative” to avoid driving further climate change through their activities.

In support of the statement, Guterres said that “for too long, the financial services sector has enabled the world’s fossil fuel addiction” that that it was now time for the industry to accelerate the shift towards renewable energy.

“They have the power – and the responsibility,” he said. “The scientific and moral imperative is clear: there must be no new investment in fossil fuel expansion, including production, infrastructure and exploration. This year, all private financiers need to stop funding the entire coal sector, from mining to power generation, and actively shift finance to renewables. People, communities and organizations of faith have the influence needed to effect this transition. I welcome this important faith-based initiative.”