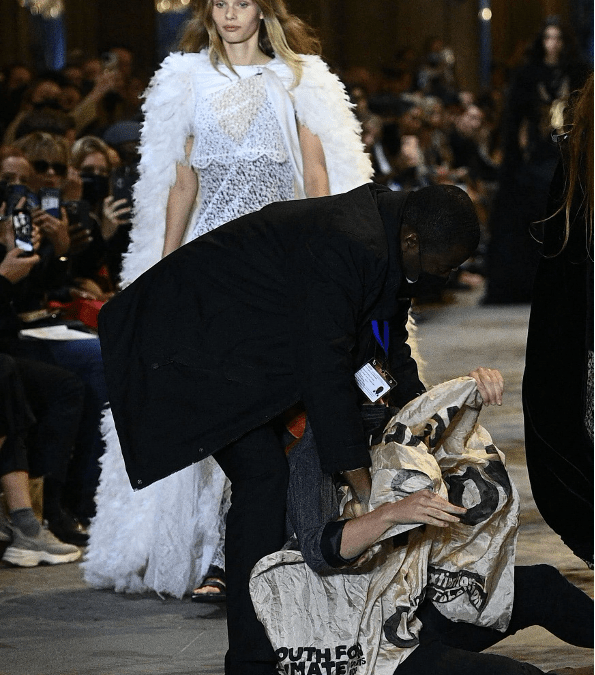 Sustainability: Where fashion is heading in 2022

Last year, a lot of planning was done around fashion sustainability — but less action. The biggest theme as we head into 2022 is the interconnection between carbon emissions, equity and supply chain.

In 2021, fashion made pledges to sustainability at COP26, material innovation accelerated and interest in circularity piqued. Most importantly, a growing realization emerged that climate change is as much about equity as it is about carbon going into 2022.

“Climate change is not about emissions. It’s about a system that has been benefiting some at the expense of the vast majority of people on the planet and the planet itself,” says Muhannad Malas, senior climate campaigner for advocacy group Stand. earth.

For all its sustainability efforts, fashion made little tangible progress last year. Emissions are still going up, circularity remains elusive, next-gen textiles have yet to scale and countless garment workers are going hungry. Actions speak louder than words, but even so, for the fashion industry, heightened conversation and urgency is a positive sign. Critics are encouraged that some of the biggest brands and highest-ranking executives are talking about end-of-life impacts and establishing biodiversity strategies, reflecting a shift in mindset as new strategies are developed for next year.

“The last 12 months have shown me that mindsets and decision-making frameworks are changing,” says Rebecca Burgess, executive director of the nonprofit Fibershed. Alarm bells are going off, she says, triggering meaningful action.

To date, fashion’s sustainability progress has been slow because it is designed to be, by tweaking only around the edges, advocates say. Sea change is now part of the conversation, more so than before. Eliminating fossil fuels and increasing worker wages, which require a systemic transformation of both industry infrastructure and business models, rise to the top of experts’ list as the most fundamental priorities to address next year. They also rank among the top sustainability themes that emerged from fashion last year.

Decarbonizing the fashion supply chain is a complicated challenge, but the level of difficulty does not make the need less urgent. If the industry devotes itself to actually achieving it, the process will need to be so sweeping that it will inherently tackle some of fashion’s other problems along the way, such as waste and overproduction, and the overuse of hazardous chemicals. 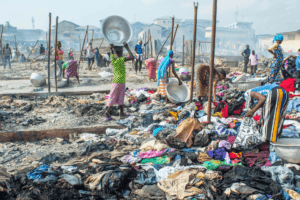 Secondhand clothes from the global market litter streets, market floors, and the ocean coastline in Accra, Ghana. Experts say waste and overproduction are at the core of fashion’s environmental footprint.    JOSHUA GANYOBI ODAMTTEN / THE OR FOUNDATION

The proliferation of low-cost fossil fuels is largely responsible for how fashion came to operate the way it does today, says Malas. “Rethinking fashion without fossil fuels is going to help catalyze this conversation about how we deal with overproduction.”

Low labor costs are another enabler of the current challenges. “The price of clothing is artificially low, partially because of poor working conditions,” says Elizabeth Cline, director of advocacy and policy at the nonprofit Remake. That’s what leads to the larger, systemic issues including overproduction and consumer waste. “The industry is being subsidized by these low wages.”

“In terms of forcing a system change, increasing the power of labor — organizing power, wages — it is absolutely one of the most effective ways to dramatically shift the business model,” she says.

Many of the industry’s environmental initiatives, however, leave people out of the equation. “Building a decarbonized fashion industry is not going to solve all of our environmental challenges,” says Cline, adding that the renewable energy sector is also vulnerable to human rights abuses. “Looking at the UN Sustainable Development Goals, number one is poverty alleviation. It’s not more recycled plastic in your collections.”

And while labour efforts have made some progress, they don’t add up to the systems change experts say is necessary.

The focus on purchasing practices is a textbook example, says Kim van der Weerd, former garment factory manager and host of the podcast Manufactured. Contracts between brands and suppliers ultimately determine the social and environmental standards in manufacturing. They had some time in the spotlight in 2021, which van der Weerd says is a change from just a year or two ago — but it’s still not enough.

The Bangladesh Accord, the unprecedented industry agreement that improved factory safety after the Rana Plaza tragedy in 2013, was renewed last year in a victory for labour advocates. However, the uncertainty leading up to it was, for many, a sign that the underlying dynamics that lead to poor working conditions have not improved much.

“What is most notable about 2021 is all that hasn’t changed and the resumption of the way things were,” says Jill Tucker, head of the Laudes Foundation’s labour rights programme, who sees pandemic-era workloads as the most recent evidence for that. “Workers are back to working 60+ hours [per] week with all the same problems and the same wages. The industry is still relying on voluntary measures and auditing regimes that have been proven to be ineffective. The industry has tried to use carrots; we need real rules and sticks.”

The passing of Senate Bill 62 in California, though, left others more optimistic. The collaborative efforts that led to successfully passing that legislation reflect a shift in views about where solutions need to come from and who should be responsible for developing them — not industry-led initiatives and not just consumers, as many past campaigns have relied on, but also suppliers and small brands already operating with practices the bill was designed to enforce.

“The bill sets an important legal precedent — that brands are jointly responsible for worker wages — that is already being used as a blueprint for change globally,” says Cline.

Ecologists have concerns about solutions becoming diluted as they scale. As regenerative agriculture catches on, for example, its practices are increasingly applied in a selective manner, without transforming the wider systems that require regeneration. It also continues to be too siloed, says Julie Stein, co-founder of Wildlife Friendly Enterprise Network, who has said fashion and society, in general, forget that farms should be part of nature, not separate from them. “My hope is that we can expand the definition of regenerative to include truly wildlife-friendly practices,” she says.

Other existing industry tactics have fallen short, sometimes to the point of impeding progress. Lower-impact materials that improve but don’t transform supply chains, such as better cotton and recycled polyester, are key examples. Malas sees a contradiction in how brands use, and talk about, recycled polyester in particular, which is fashion’s most popular “sustainable” material, but is made from plastic, releases microfibres into the environment, and perpetuates dependence on fossil fuels.

Toward the end of last year, all eyes were on COP26 and partial fixes continued to be on display, but there was also hope: leaders condemned fossil fuels unequivocally for the first time and made more connections between climate and biodiversity. Fashion had a bigger and more wide-ranging presence than ever before and the event had the largest Indigenous representation in COP history. However, many were left feeling disappointed: global leaders set weak emissions targets and watered down their final agreement, while fashion failed to fund the work needed to meet its own climate goals. Nor did the industry attempt to address the bigger, underlying issues at play, says Laudes Foundation’s Tucker. “Ignored at COP, and by brands, is any conversation and action around volume and growth and endless consumption.”

Sweeping changes, such as transforming business models to address overproduction, may be daunting. However, not only would this be the most promising path to achieving global targets, advocates say, it would also drive progress on other peripheral problems. Recognising that all of the challenges are interconnected also simplifies, in a way, the search for ways to solve them by sustaining focus on the root problems. This year, the industry may begin to awaken to that reality. “I see light bulbs going off at deeper levels,” says Fibershed’s Burgess. “With brands we are working with, transformative ideas are becoming increasingly part of the collective vision.”

By Rachel Cernansky for VOGUE Business