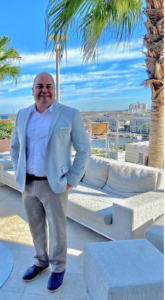 With more than 26 years of experience within the spa and wellness field, Richard has been overseeing the Spa at the JW Marriott Tampa Water Street as Director of Spa since it first opened at the end of 2020.  Richard created a haven at his spa allowing guests to feel relaxed and rejuvenated. Originally from Puerto Rico, Richard is a highly respected industry professional with an exemplary track-record, reputation and portfolio of previously held positions at other Marriott properties, including the St. Regis Bahia Beach Resort in Puerto Rico and the Vinoy Renaissance St. Petersburg Resort & Golf Club.

Richard’s career started as a Personal Trainer and Massage Therapist and quickly led up to Lead Trainer Therapist at the Westins Hotels & Resorts in Rio Mar Rio Grande, Puerto Rico, where he was responsible for training massage therapists as well as being a personal trainer.  In just over one year Richard became an Owner and Director of the Institute of Massage of Puerto Rico where he organized the school’s accreditation policies and procedures, working with Federal Funded WIA Programs for seven years.  From there Richard moved on to becoming an International Master Spa Educator for the span of eight-plus years in spa and bodywork with new and existing spas in the US, Mexico, Thailand, and Japan.

Throughout his duration as a Master Educator with experience as a Massage Therapist, Richard held the role of Lead Trainer Therapist and Assistant Massage Manager at the Golden Door Spa in Puerto Rico.  In this role, Richard was in charge of the spa opening as a leading member on-brand training and remained in this position with yearly retraining’s, which included sales and customer service to maintain a high standard in a healing spa environment and smooth operation of their 26,000 square foot Golden Door Spa.

In 2014 Richard joined the Ritz-Carlton Dorado Beach in Puerto Rico as their Spa Director, a spa designed to inspire well-being and provide pure relaxation.  Shy of a year, he was appointed Spa Director at the luxurious Remede Spa at St. Regis Bahia Beach Resort in Puerto Rico proving guests with extraordinary products, custom services, and experiences that offered a sense of escape and rejuvenation with unparalleled results.

At the start of 2018, Richard moved to Florida as the acting Director of Spa and Recreation for The Renaissance Vinoy in the heart of St. Petersburg.  Leading the Spa, fitness, tennis, and pool redevelopment for the 1925 historic hotel Richard led his team on a path to success using his expertise and ability to completely immerse himself within his creative passion to provide the ultimate experience for his spa guests.

His successful background advanced him to his recent position as the opening Director of Spa at the JW Marriott Tampa Water Street where he continues to prove his ability as a proficient team leader providing his guests with unique wellness experiences that are luxurious, purposeful, and all about their spa visit.

When Richard is not busy at work you can find him checking out the endless array of local restaurants, enjoying the outdoors or fishing, boating, riding his bike, and exploring all the spas in the area.