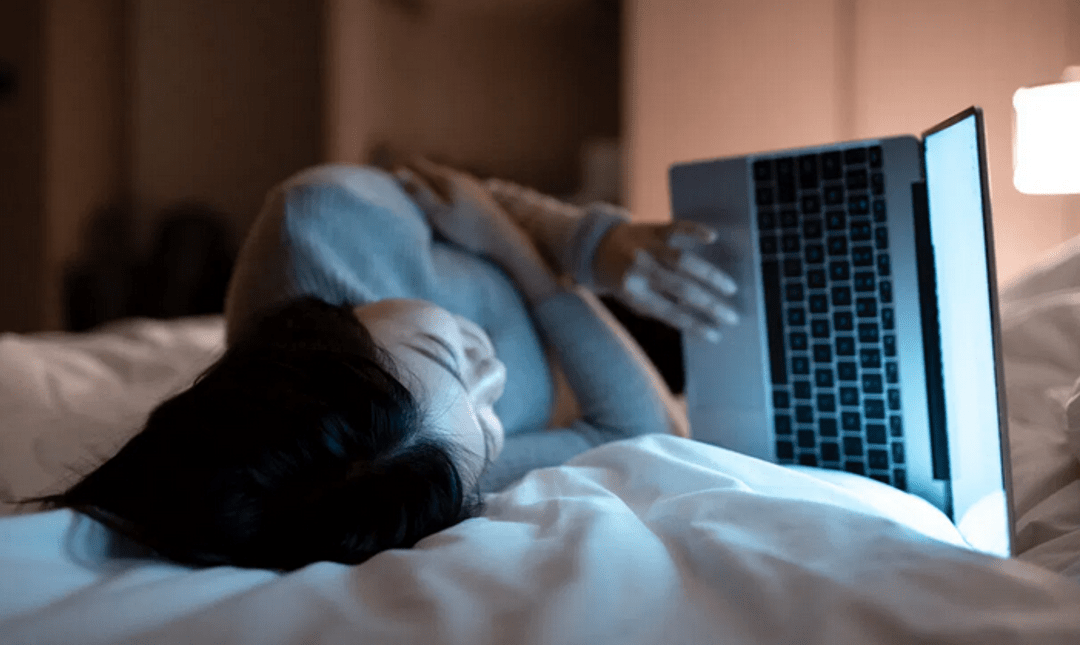 What’s Blue Light, and How Does It Affect Our Eyes?

Chances are, you’re reading this article on a device that emits blue light. With the amount of time people spend in front of screens reaching record highs, should you be concerned about the blue light streaming into your eyes?

Here’s blue light at a glance, including what it is and how it can hurt — or help — your health.

What is blue light?

The world is pulsing with electromagnetic energy. It travels around us, and even through us, in waves. The waves vary in length from longer radio waves, microwaves, infrared, and UV waves to the shorties of the electromagnetic spectrum: X-rays and gamma rays.

Most electromagnetic waves are invisible. But a small band of waves, known as visible light, can be detected by the human eye. Visible light waves vary in length from 380 nanometers (violet light) to 700 nanometers (red light).

The longer the wave, the less energy it transmits. Blue light has very short, high-energy waves. In fact, they’re only slightly longer and less powerful than ultraviolet (UV) waves (which are too short for people to see with the naked eye). Health experts have warned against the harmful effects of UV rays, which can damage your skin and your eyes. High-energy blue light waves are nearly as powerful.

If all the light waves are in the sky, why does it usually look blue?

The whole light spectrum is traveling through our atmosphere — but the sky usually looks blue because blue light waves bounce and scatter off the nitrogen and oxygen particles in our atmosphere. Nitrogen and oxygen particles are perfectly formed to deflect blue light. At the end of the day, when light from the setting sun travels a longer distance to your eye, much of the blue light will have dissipated by the time the sunlight reaches you. You’ll see more of the long red and gold light waves. Voila: a stunning sunset.

Blue light, like other colors of visible light, is all around you. The sun emits blue light. So do fluorescent and incandescent light bulbs. Human beings are exposed to more blue light than ever because of the widespread use of devices that rely on light-emitting diode (LED) technology.

Computer and laptop screens, flat-screen televisions, cell phones, and tablets all use LED technologies with high amounts of blue light. 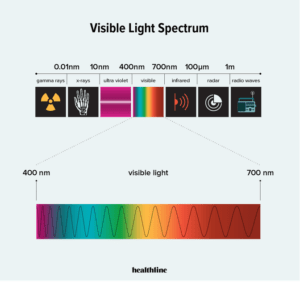 Blue light is part of the visible light spectrum. Too much blue light may damage retinal cells. Maya Chastain.

What does blue light do to your eyes?

Your eye is equipped with structures that protect it from some kinds of light. Your cornea and lens protect the light-sensitive retina at the back of your eye from damaging UV rays, for example. Those structures don’t keep out blue light. And you’re exposed to a lot of it — the natural blue light from the sun far exceeds the amount from any one device.

Nevertheless, some ocular health experts have expressed concern about exposure to blue light from back-lit digital screens and devices because people spend so much time using them at such a close range.

A 2020 study published in the Indian Journal of Ophthalmology found that during COVID-19 lockdowns, for example, 32.4 percent of the study population used a blue-light-emitting device 9 to 11 hours a day. Another 15.5 percent used the devices 12 to 14 hours a day — a sizable increase in screen time, probably due to changes in the way people work during the pandemic.

So far, research does not appear to validate the concern about blue light eye damage. While some animal studies Trusted Source have shown that blue light can damage cells in the retina, eye doctors say there is little proof that blue light damages the retina of the human eye.

One recent exception: Doctors reported that a woman who used an LED face mask to improve her skin had distorted vision and a retinal lesion afterward.

Researchers point out that because LED devices are relatively new, there aren’t any long-term studies to measure what blue light may do to your eyes over the course of your lifetime.

Risks and side effects of blue light exposure

While current research indicates that blue light from computer screens and handheld devices probably does not pose a serious risk to your eyes, there are some other risks to consider. Here’s a quick look at the risks and benefits of blue light waves.

Age-related macular degeneration (AMD) is the number one cause of sight loss in people over 50 years old. It happens when a structure in the back of your eye, the macula, becomes damaged as you get older. The result is that you lose the ability to see the center of your field of vision. You may still be able to see things on the periphery, but details and objects in the center of your sight lines will become blurry and, over time, be impossible to see.

Although animal studies and lab studies raised questions about whether blue light could speed up the process of macular degeneration, ophthalmologists and researchers do not think there is a verifiable link between using LED or blue-light-emitting devices and AMD.

Similarly, a 2018 research review also concluded that there was no evidence blue light-blocking lenses lessened the chance that someone who has had cataract surgery would later develop macular degeneration.

Using digital devices up close or for long periods can lead to digital eye strain. Research has shown that when people use computers, laptops, and other digital devices, they tend to blink less often than normal. Fewer blinks can mean less moisture and more strain on your eyes.

Digital eye strain means different things to different people. When your eyes are strained from staring at a blue-light-emitting screen, you might notice:

While the jury is still out on the long-term effects of blue light on human eye health, there is more consensus around the effects blue light has on your sleep-wake cycle.

Light sensors in your eyes (and even in your skin) can perceive the difference between bright daylight (with its intense blue light waves) and the warmer, redder tones that signal the day is ending. When the light around you eases into those sunset shades, the sensors in your eyes prompt your body to release your body’s natural stores of melatonin, the sleep-inducing hormone.

Researchers have found that when you’re exposed to blue light in the evening hours, your body doesn’t release as much melatonin, and your sleep cycle is delayed or disrupted.

When blue light disturbs your sleep cycles, other problems can also develop:

Studies have shown that exposure to blue light can perk up your reaction time and stimulate alertness when you’re not at your peak performance time of day.

Blue light therapy is now one of the go-to treatments to relieve seasonal depression. Researchers have found that it’s also an effective treatment for depression that isn’t seasonal, especially when combined with antidepressant medications.

Multiple studies have shown that blue light kills acne-causing bacteria and reduces inflammation in acne breakouts. One important note: If you’re going to try at-home blue light devices, make sure you choose one approved by the Food and Drug Administration (FDA).

Actinic keratosis and plaque psoriasis have both been improved by treatment with blue light. Blue light therapy has also been effective in treating basal cell carcinoma tumors.

How to limit blue light exposure

The American Academy of Ophthalmology recommends that you take these steps to manage the risks from blue light exposure:

While you’re using a device that emits blue light, stop every 20 minutes to focus on objects that are around 20 feet away. Study those objects for 20 seconds before you return to your up-close viewing.

Eye drops, such as artificial tears, and room humidifiers are all good ways to keep your eyes from becoming too dry and irritated while you’re using blue-light-emitting devices.

Use eyeglasses with the right prescription

Squinting at screens for long periods isn’t recommended for the overall health of your eyes. If you wear prescription eyeglasses to correct your vision, make sure you’re wearing a prescription intended for the distance between your eyes and your screen — ideally arm’s length away. Most glasses are formulated for longer distances.

Adjust the blue light on your screen

To reduce the risk of eye strain and sleep disturbance, you may want to set your screens to a “night shift” setting with warmer tones. You can also purchase blue-light-filtering screens to slip over your computer screen when you’re working at night. The filter could cut the glare off your screen. And research shows that they block 30 to 60 percent of blue light, though it isn’t clear whether blocking the blue will help preserve the sleep-wake cycle for those who use back-lit screens before bedtime.

Studies have repeatedly shown that blue-blocking glasses are effective at reducing blue light, but researchers stop short of recommending them to protect your eyes because there isn’t enough evidence that they reduce eye strain or improve eye health.

Blue light is part of the natural electromagnetic energy spectrum. Most of your exposure to blue light is from the sun, but some health experts have raised questions about whether artificial blue light could be damaging your eyes.

Some studies have shown that blue light damages cells in laboratory animals. So far, there isn’t much research that indicates blue light from digital devices and LED screens damages human eyes.

Prolonged exposure to artificial blue light can lead to digital eye strain, though, so it’s a good idea to take frequent breaks if school or work involves hours of screen time.

Blue light can also interfere with your body’s internal sleeping and waking cycles, too, so you may want to curtail your use of devices before bedtime or switch to an amber-light mode.

Read more about Blue Light, use this link:
https://www.healthline.com/health/what-is-blue-light