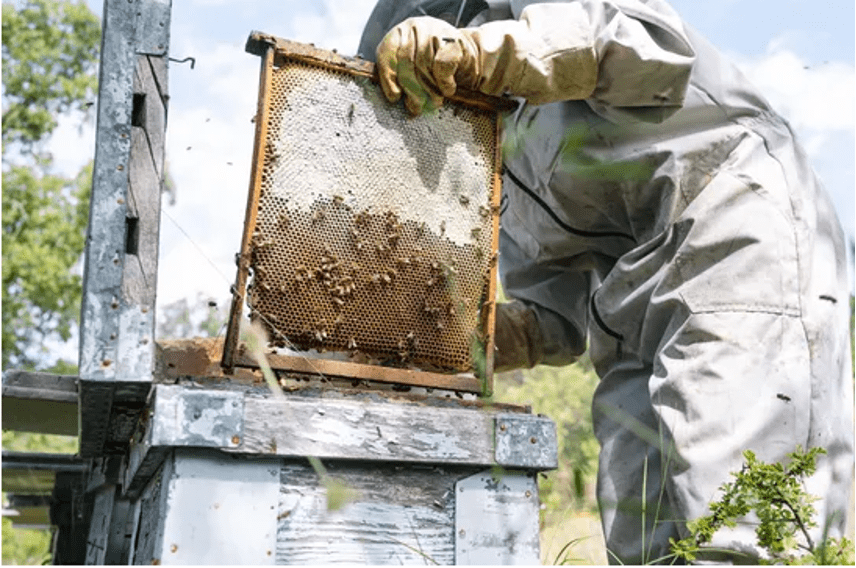 Here’s Everything You Need to Know About Saving the Bees

You’ve heard this call to action before, but what’s the buzz really about? Turns out, bees are incredibly important in nature and in human food production.

According to an EarthDay.Org report, there are more than 20,000 distinct bee species worldwide. In the U.S., there are native bees (more than 4,000 species) and commercially managed bees (mostly imported European honeybees). Both are vital for different reasons. The former are wild and keep our forests and meadow ecosystems functioning; the latter are managed by big agriculture to pollinate crops that feed the world.

Unfortunately, most bees are in trouble. Colonies around the world are collapsing and many species are edging towards extinction. Their plight has been described as the death of a thousand cuts, and the causes range from widespread pesticide use to disease to climate change.

So, what can we do? How can we save the bees? Here’s everything you need to know.

Why Are Bees Important?

“Pollinators are small but mighty parts of the natural mechanism that sustains us and our world,” Midwest Regional Director Tom Melius said in a U.S. Fish and Wildlife Services (FWS) statement that accompanied the agency’s listing of the rusty patched bumblebee as endangered. “Without them, our forests, parks, meadows and shrub lands, and the abundant, vibrant life they support, cannot survive, and our crops require laborious, costly pollination by hand.”

In the wild, many plants rely on pollinators to reproduce and continue growing. Additionally, various animals depend on these plants for their survival. That’s why, according to the EarthDay.Org report, bees are a “keystone species” — they pollinate the food sources of so many other organisms.

Greenpeace described bees as prolific in their work: a single colony can pollinate 300 million flowers each day.

Moreover, bees themselves and the honey they produce are good food sources for many animals.

“Take bees out of the equation, and the effects can be felt all the way up the food chain,” explained another EarthDay.Org article. Bees and other insects keep the food chain working.

This is especially true of native bees.

“Native plants attract native bees,” explained Krystle Hickman, a bee photographer and community scientist. These plants rely on their bees for pollination. Honeybees, which were imported to North America, prefer to pollinate non-native species, she added.

Bees similarly pollinate the majority of human food. According to Greenpeace, bees pollinate a “staggering” 70% of crops that feed people, including our fruits, nuts and vegetables.

Greenpeace also reported that honeybees, both wild and domestic, perform roughly 80% of all pollination activities worldwide. This includes everything from asparagus to broccoli, cotton to coffee, noted Heifer.org. Certain crops rely almost entirely on honeybee pollination. Cherries and blueberries, for example, are 90% dependent, and almonds are 100% reliant on honeybees, reported the American Beekeeping Federation. Importantly, honeybees also pollinate alfalfa, an important grass feed for beef and dairy cows.

In the future, “pollination shortfalls” for fruits and vegetables could trigger “nutritional deficits” in diets as fresh foods are replaced by wild-pollinated grains, rice and corn, The Guardian warned.

The pollination services that bees provide confer a huge economic benefit to the world. The EarthDay.Org report valued bee-pollinated crops worldwide to be worth $577 billion annually. In the U.S. alone, pollinators contribute $24 billion to the agricultural industry every year through pollination, the report said.

Beyond agriculture, entire industries are also based around bee-derived products like beeswax and honey. If these multibillion-dollar industries collapse, it could put tens of thousands out of work and harm the economy.

Scientists forecast that as bee populations continue to decline, the production of food crops will also decrease. Unfortunately, this is directly opposite what the world needs.

What’s Happening to the Bees?

So, why are bees dying?

“Habitat loss, acute and chronic pesticide poisoning, diseases and parasites, increasing intensification of conventional farming, and even the impacts of climate change are all taking their toll on bee health,” noted SaveBees.Org. “Many of our bees are sick, stressed, and undernourished.”

Unfortunately, it’s not just managed bees that are in trouble. In 2017, the Center for Biological Diversity reported that one in four native bee species is at risk of extinction.

In 2017, the rusty patched bumblebee became the first wild bee to be listed as endangered in the continental U.S. Once “common” and “abundant,” the species experienced a “swift and dramatic decline” of 87% in the late 1990s and continuing to the present, Mongabay also reported. Only small, scattered populations remain.

Because native bees pollinate native plants, if the bees go extinct, it could also wipe out endangered plant species and disrupt entire ecosystems, the report added.

Bees are facing a “perfect storm” that threatens their future survival. Who and/or what is to blame for this bee apocalypse?

Human activity is the primary driver, with habitat loss, pesticide use, monoculture farming and climate change wreaking havoc on bees and other insects.

Habitat loss, particularly of flowering meadows and fields, is devastating bee populations. As humans industrialize and urbanize, there are fewer places for bees to nest or forage. Less greenery and less diversity of plants in and around suburbs and cities mean bee habitats have become fragmented. What’s left are “pollinator deserts” that have replaced once abundant wildflower meadows, SaveBees.Org reported.

The rise of commercial agriculture brought about increased pesticide use. These chemicals, especially those in the neonicotinoid family, have decimated bee populations.

If the deadly combination of habitat loss, toxic pesticides and industrial agriculture wasn’t enough, there are also environmental threats to bees.

These multiple, overlapping factors continue to affect bee populations negatively and make them more susceptible to diseases and pests.

How Can We Save the Bees?

That brings us to how we can save the bees. Just like there are multiple threats endangering bee populations, so too there are numerous actions one can take to help. We can start by reversing the major threats to bees we’ve already covered. 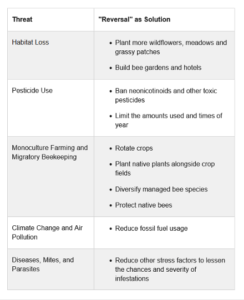 For more information, use link to read about why Bees matter and how we can save them.